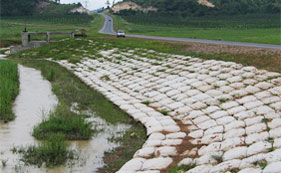 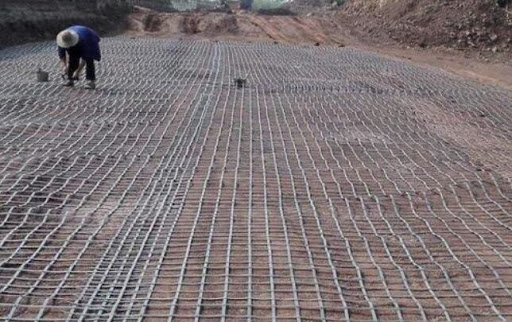 The grid is a two-dimensional grid or a three-dimensional grid screen with a certain height, which is made of polypropylene, polyvinyl chloride and other high molecular polymers through thermoplastic or molding. When used in civil engineering, it is called geotechnical engineering. Grille. As a flexible material, under load, the friction between the geogrid and the soil will restrict the lateral deformation of the soil. Because of the high bonding force between the geogrid and the soil, the tensile resistance and shear stress are improved. Effectively improve the settlement of the cross section of the embankment and the junction of the old and new subgrades to avoid vertical and horizontal cracks. The geogrid is suitable for all kinds of embankment and roadbed reinforcement, slope protection, and cave wall reinforcement.

Its characteristics are as follows:

(1) High strength, small creep, adapt to various environmental soils, and can fully meet the use of tall retaining walls in high-grade highways.

A certain highway project has been open to traffic for many years. With the rapid development of the social economy and the continuous increase of traffic volume, the service level has gradually shown a saturated state. For this reason, the widening and expansion of the roadbed is extremely critical. The total length of this project is 165.1km. It was originally a two-way four-lane, but is now designed as a two-way eight-lane. To meet the requirements of construction design and improve construction quality. This paper selects the 5m high roadbed at the K442+110 section as an example for analysis. According to the field survey results, the thickness of the foundation silt of this section is 4.5m, the thickness of silty silty clay is 5.7m, and the thickness of silty clay and silt is 11.3. m. 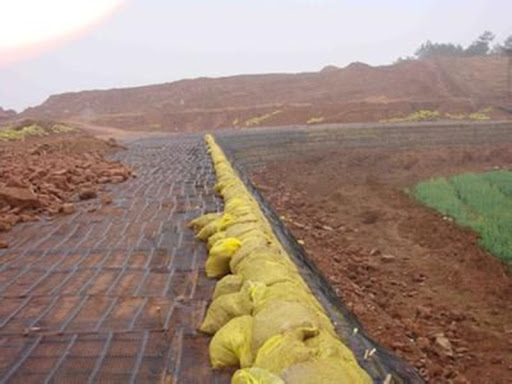 In order to effectively deal with the differential settlement between the new and old subgrade, it is necessary to pave the geogrid horizontally between the new and old subgrade to improve the stability of the subgrade and reduce the uneven settlement. As a plastic flat mesh material with small weight and good flexibility, the bending effect of geogrid construction is not significant, and the construction is convenient.

(1) Preparation of construction materials. 1) Packing. The materials selected for the filler are mainly sandy soil, gravel and gravel, which have strong water permeability. The selection of silt and humus soil is prohibited. If there are organic materials in the selected filler, and there is more domestic waste, it should not be used. Compared with the packing thickness, the particle size of the filler should not be greater than 75%, and the maximum particle size should be controlled within 15cm. If the coarse material is not smooth enough or too sharp, it should not be used when paving the surface of the ribs. There are two main types of crushed stone specifications, namely 30-50mm and 50-70mm, and the configuration ratio is 70:30. 2) Reinforced materials. Geogrids and geotechnical belts are geosynthetic materials used to reinforce the roadbed. As a new type of geosynthetic material, plastic geogrid has the advantages of a stronger overall structure and a larger coefficient of friction, etc., and it has been widely used in the construction of soft foundation reinforcement. This paper selects plastic two-way geogrid for construction.

(2) Measure and stake out. According to the design requirements, the pile top elevation is measured and determined, and the pile position is laid out and the control pile is set. At the same time, the site materials were checked and the foundation line of the reinforced earth retaining wall was measured. In addition, it is necessary to check the cross section of the reinforced soil slope and check the grid laying. According to construction regulations, clean up the site well.

(3) Laying geogrid. The full use of the reinforcement effect of the geogrid is used as the construction principle for laying the geogrid. During the laying process, the direction of high strength should be set to the direction perpendicular to the axis of the embankment. All geogrids are required to be tightly connected. Compared with the design tensile strength of geogrids, the strength of the connection position in the force direction should be higher, and the overlapping length should be controlled above 15cm. The geogrid is required to be laid flat without wrinkles. When laying, the manual method can be selected for tightening operation, and then the geogrid is fixed on the filling surface, and the selected tools are U-shaped nails. The soil surface of the geogrid must also be leveled. If there are stones, it must be cleaned in time to avoid damage to the geogrid. After completing the paving operation, it is necessary to confirm whether it is fixed again to avoid the displacement of the geogrid during the filling construction.

(4) Filling and compaction. Loaders and excavators are selected for construction on the filled soil or natural foundation that has completed the compaction operation, and the paving thickness of the filled soil is required to meet the design requirements. The thickness between the positions of the reinforcement and construction equipment wheels, crawlers, and the geogrid must be controlled at 150mm or more to avoid damage to the geogrid by mechanical equipment. In the backfill paving and rolling construction, no reinforcement deformation or shifting phenomenon shall occur.

During the implementation of compaction, the moisture content and density of the backfill should be strictly controlled to ensure that the degree of compaction meets the construction requirements.

(5) Transition treatment for different settlements of subgrade. First, the subgrade fill and excavation joint. The two-way geogrid exceeding 40KN/M is selected as the main method for the construction of the subgrade fill and excavation junction. The generally selected geogrid type is GSZ60-60. In the construction of subgrade widening, the geogrid should be set at the step position where the new and old subgrade touches and the top layer of the subgrade. This can effectively enhance the cohesive force between the new and old subgrade. In the case of uneven settlement and reduced lateral displacement, Ensure the rapid formation of the overall structure of the new and old roadbeds. Second, the old road widens the junction of the new and old subgrade. Under normal circumstances, when the height of the roadbed is more than 3 meters, the steel-plastic composite grid should be set at a position 20 cm away from the top of the roadbed to ensure that the longitudinal ultimate tensile force of the steel-plastic geogrid is above 60KN/M and the lateral limit The tensile force is above 20KN/M, and the elongation must be controlled below 5%.

(6) Key points of quality control. First, the quality of the material itself needs to be guaranteed, and it should be purchased through formal channels to ensure that there is a formal quality inspection report. And after the purchase, the physical and mechanical properties of the materials will be sampled to do a good job in material quality control. Second, the construction site should do a good job in site leveling and compaction, to prevent the appearance of hard objects from causing damage to the grille, and to deal with uneven areas. Third, pay attention to the quality control of the grid laying effect. The reinforced materials should be flat and dense, avoid overlapping and twisting, and the laying direction should be perpendicular to the longitudinal surface of the wall. The laying length, width, connection method and strength should meet the design requirements. Fourth, the filler block should not be too large, generally not exceeding 2/3 of the layered thickness; the laying thickness should not be less than 30cm, and the compaction should not be less than 15cm. The degree of compaction must also meet the construction requirements.

The rapid development of my country's national economy has promoted the gradual increase in traffic volume. A large number of built roads can no longer meet the current traffic development needs, and the reconstruction and construction of roadbed projects has become a major problem to be solved urgently. The application of geogrid reinforcement technology in the roadbed widening and reconstruction project can not only solve the differential settlement of the roadbed, but also further expand the internal friction angle of the widened roadbed soil, which is of great significance to the improvement of the bearing capacity of the roadbed.

Previous： Points for Attention in Construction of a Reservoir in Xinjiang
Next： Geotextile construction case
Get the latest price? We'll respond as soon as possible(within 12 hours)